Speaker Bio: Erin Semmens graduated with a degree in Biology and Political Science from Duke University and received an MPH in Environmental and Occupational Health and a PhD in Epidemiology from the University of Washington. She is an Assistant Professor of Epidemiology in the School of Public and Community Health Sciences at the University of Montana. Erin’s research investigates the effects of environmental and occupational factors– and more recently their interaction with social influences– on long-term health. Specifically, she focuses on the health impacts of air pollution from multiple sources including wildfires, wood smoke, and traffic. 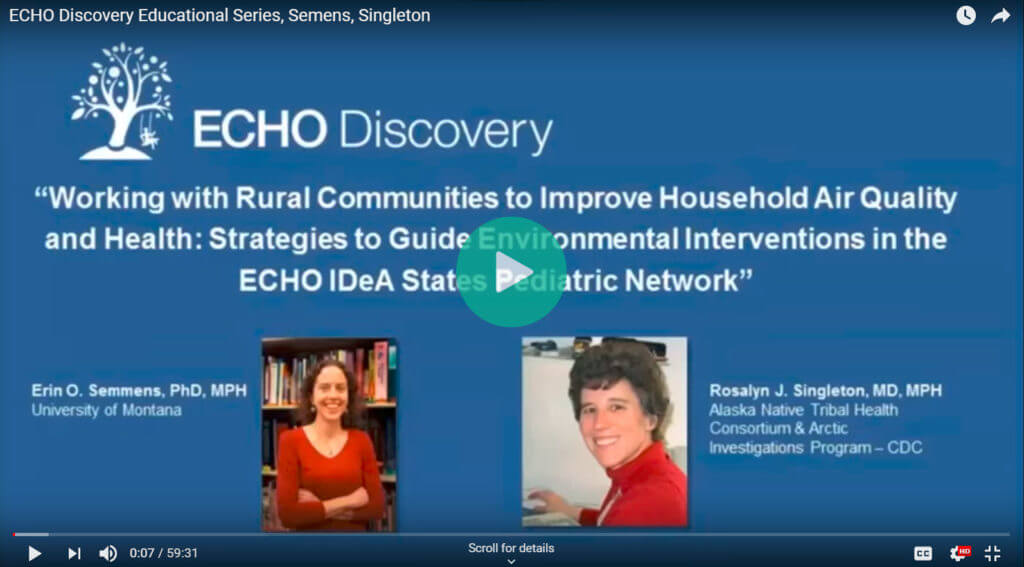 Q: I would like to know the hypotheses that link those special populations, including Alaskan Natives, to a prevalence of bronchiectasis?

Ros Singleton: It is clear in collaborations with Australia and New Zealand and Canada and other researchers on bronchiectasis that this orphan disease is prevalent in these populations because of environmental and social factors. We did a three country analysis and discovered that household crowding was one of the most prevalent common factors. In Alaska lack of running water, and in Australia access to basic household features like a working refrigerator and a working sink, are the factors that are associated with both pneumonia and childhood pneumonia, which is the driver of bronchiectasis. Bronchiectasis was common in many other populations around the world until vaccines and improvements in running water and basic public health measures have really reduced that risk around the world. But it is still prevalent in much of the developing world and low income countries, although rarely identified because CT scans are not available. We have identified very high rates in many different indigenous populations.

Q: Indoor PM2.5 did not decrease after intervention, was it possible that PM2.5 from outdoors and neighboring houses played a role and that is why you do not see the decreased PM2.5?

Ros Singleton: I don’t think that is a major factor based on the feedback that we received from the environmental health specialist. It is possible that in a time when there is a lot of wood burning that you could have ambient 2.5 that comes in and so that could be a factor. Many of these homes are on a very windy tundra so that ambient 2.5 level is not very high in general, but we don’t have the data to prove that so that is one possibility.  I think one other major thing that we identified was just the challenges for accessing dry wood.  You have to find dry wood and in many areas there is no wood available and so people use driftwood and sometimes unfortunately trash.  My colleagues have done a lot of education around the best practices in wood burning, and that’s why I’m excited about this new potential project in incorporating indigenous knowledge and really coming together to determine what are the best things to burn and how to burn so that it is most efficient and has the lowest PM2.5.

Erin Semmens: In the ARTIS study we excluded homes where there was an active smoker in the home, and in our ongoing study we did not make that exclusion because we thought that would exclude too many families. We don’t include smoking cessation as part of the education. We do nicotine wipes in the home as an indicator of whether there is smoking inside the home. I can say from looking at Montana birth certificate data that about 15% of women report smoking during pregnancy which is likely an underestimate, but still fairly high.

Ros Singleton: In Alaska, smoking rates are very high among Alaskan native people. Over 40% of adults smoke, as compared to about 20% in other populations. In Navajo smoking is actually very rare.  In our study we did do tobacco cessation education and there are major tobacco cessation projects underway in Alaskan Native communities in collaboration with Mayo Clinic, and specifically with pregnant women because the rate of tobacco use including both smoking and also chew is extremely prevalent and smoking cessation is challenging.  However, the homes in this study, as well as homes of families that have children hospitalized, have told us for many years that they do not smoke in the home.  I believe that household education has really hit on fertile ground and people do understand the message about not smoking indoors. But smoking itself is very prevalent.

Q: In our region (South Dakota), many of our families are pretty mobile between seasons. Is this a common occurrence in your region?  If so, how did you handle this in the analysis?

Ros Singleton: In our smaller study, we did have one family withdraw because of moving, but in general we were able to work with families that were there for the year.  Moving is very common and that was a challenge. One family was actually living in a Conex (shipping container) at the initial part of the study and then had other housing.

Erin Semmens: Moving has been a challenge in our study, so when we provide potential participants with information about the study, we ask if they plan to be in the same home over the next two years.  So to be in the study they have to plan to be stable with respect to their residence, but that isn’t always the case. That is the primary reason participants drop out of the study is because they move and when we are utilizing interventions that are aimed at improving indoor air quality it is very difficult when a person moves to a different home, even if it is another home with a wood stove to compare that.  Unfortunately that has resulted in lost to follow-up or participants withdrawing from the study due to moving.  A somewhat related point is when children spend part of their time during the week with one parent and part of the time with another parent. In those cases the child can be in the study, but we just do all of our sampling at the one residence.

Erin Semmens: In the Libby change-out there was a decrease in ambient PM2.5, which is a huge achievement, and it was such a large scale change-out. 1200 wood stoves and the population of Libby is under 3000 people, so that was a very large scale change-out in that community. But within the homes, indoor air quality reductions varied from home to home and the reason we hypothesized that there weren’t universal reductions is just having the new cleaner burning wood stove is not sufficient and that there are all these other best burning practices and education around how to use the wood stove that are needed as well. Another consideration is that people with new wood stoves might end up using their new stoves more.

Ros Singleton: In a pre-study home visit, the healthy home specialist said that the house was so smoky you could hardly see across the room. Obviously if you have a wood stove that is that bad and you have an alternative like a Toyo stove you are going to use the Toyo stove, but then if you get a great new wood stove that is much more efficient than you will probably revert to using the wood stove. That is one of our hypotheses, that no matter what you do to a wood stove it still has more PM2.5 than not using a wood stove. So if the use of the wood stove increase, then your PM2.5 may increase just because of that.

Ros Singleton: What you burn is so critical and like I mentioned a lot of the houses in Alaska are in non-treed areas. People burn driftwood and you have to leave driftwood for a long time for it to become dried, and by default people often use wet wood and burn wood that is wet. The wetter it is then the more inefficiently it burns and you have higher PM2.5 gas and other things. What you burn is critical.  If you burn trash you can imagine what is in newspaper print and other things. There are all kinds of volatile compounds that are in trash and in other paper products that may have plastic also.  Sometimes families revert to burning trash because that is what they have available. There has been many efforts to try to improve this. One effort is education on stacking and drying wood, and the emphasis on using only wood. There are also some very innovative projects that provide very efficient pellets. We’ve received feedback from some of those, but unfortunately it is pretty expensive to have them shipped up to Alaska so we haven’t done that intervention yet.

Erin Semmens: Having dry wood is not always available even if you live in a place like Montana that has a lot of trees and a lot of wood available, you may not have dry wood available. One of the main factors we saw in our pre-intervention year in the ARTIS study was that letting your wood dry out for a year or more was associated with lower PM2.5 concentrations, so it is a really important feature of best burning practices. In one community in a different study taking place in Idaho that tries to address that by having a community-level intervention with a community wood yard where the wood is stored properly and in season for the recommended length of time and then distributed to elders living in the community to provide them with access to dry wood. That is one way to try and address that challenge.

Q: I wanted to know more details about the air filtration device used in their study. Erin says it was a 3M electrostatic precipitator but I was interested in knowing more details about this device such as model and how they were maintained in the study. The info would help me understand why they did not observe reductions in PM2.5.

Erin Semmens: We used a large 3M filtrate with an electrostatic filter. We recommended that homes run the filter continuously on the highest setting, and we saw substantial reductions (nearly 70% greater than those observed in the placebo arm) from the pre- to post-intervention winter. We replaced the filter approximately once per month. It was the wood stove change-out arm, in which we did not see significant reductions in PM2.5 from the pre- to post-intervention winter.

Q: Have insulation in the homes had been investigated?

Ros Singleton: For Alaska studies – In general, the houses are insulated and tend to be tight homes for heating efficiency which can exacerbate indoor air pollution.  For the most part, homes for our study had already had insulation evaluated through weatherization programs.

Erin Semmens: That is a great question and reminds me that we did blower door tests in the ARTIS study to evaluate airtightness. I recall we had a wide range of values but I am not sure if or to what degree home tightness varied between treatment arms. Theoretically, it should have balanced out, but I would need to look back to see if it actually did.