Pregnant Women’s Mental Health and Its Influence on the Next Generation: Implications for ECHO Science

Speaker Bio: Dr. Catherine Monk holds dual appointments as a Professor of Medical Psychology in the Departments of Obstetrics & Gynecology, and Psychiatry, and is Director of Research at the Women’s Program at Columbia University Irving Medical Center, and Research Scientist VI at the New York State Psychiatric Institute. Originally trained as a clinical psychologist treating children and adults in a program that emphasized the developmental origins of psychopathology, Dr. Monk’s research brings together the fields of perinatal psychiatry, developmental psychobiology, and neuroscience to focus on the earliest influences on children’s developmental trajectories — those that happen in utero and how to intervene early to help pregnant women and prevent risk for mental health disorders in the future children. 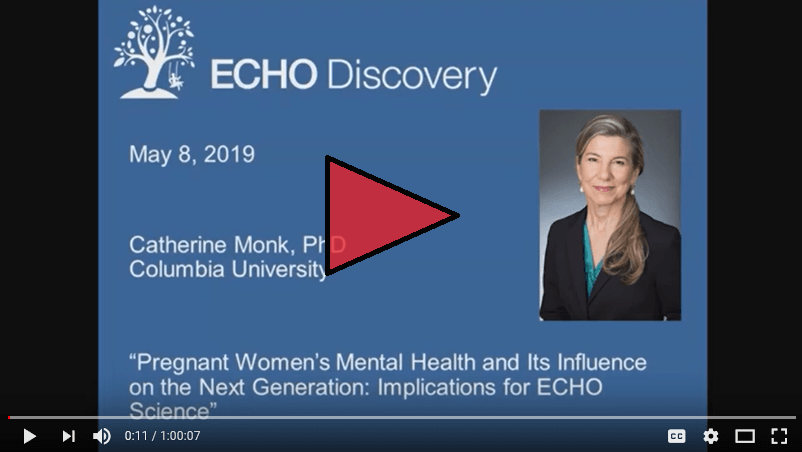 Q: How do conceptualize stress?  What are the challenges in measuring stress?

A: Stress is so used that it can lose precise meaning, but it is about the person-context experience and about perception.  Stress can be measured by physical manifestations (allostatic load) or mental (subjective experience). The challenge in measuring is the difficulty in reliably linking high stress to high cortisol.

Q: One of the implications of the work was social support and its impact on outcomes.  What would it look like to do a study of this as part of ECHO?

A: Social support has often been a co-variant or a moderator in past studies, but it actually accounts for large differences between groups, so it’s important to focus on in the future. ECHO could mine the data to create a hypothesis about the role of social support in creating positive outcomes. Loneliness is a factor that has been studied minimally, but would be fascinating to look at more closely, especially as it is differentiated from stress (women can be depressed or stress, but have social support).

Q: A type of research that you could look at that controls just for social support is the studies done on women having a doula at their birth. Has this been researched?

A: There is some data out there about the positive effect of doulas, but it’s not rigorous, so we could certainly bring in that perspective. Also, depending on where a woman gives birth, doulas may or may not be as welcomed and included in the process.

Q: In what ways would you study contributions of fathers in social support that might impact child outcomes?

A: “Belonging” is fairly general at this point, and not really distinguished as belonging with family, friends, or baby’s father, but we want to learn more about fathers/partners, and their roles in social support.

Q: Is there any data on pre-pregnancy stress and pregnancy and neurodevelopmental outcomes?

A: This is a main question of local cohort’s ECHO research.

A: The part of New York (Washington Heights) where this cohort is includes a diverse group of women, with a large representation from Latina and low-income women.  This includes women in homeless shelters.

A: Treating women’s psychiatric issues during pregnancy was not enough; parenting issues and risk factors that contributed to these issues were not impacted by the direct treatment of depression, and had to be addressed separately.

Q: In addition to fathers, teams should consider asking pregnant women about specific support from mother or other family/family-like individual. Particularly in minority communities and those of low-income, if biological fathers are not maintaining partnership with mothers, these individuals can play a critical role (our Memphis focus groups pointed this out to us too late for us to assess this). Our questionnaires don’t typically ask about this, and instead ask about partners.

A: That’s a great point, and I agree this needs to be broadened.